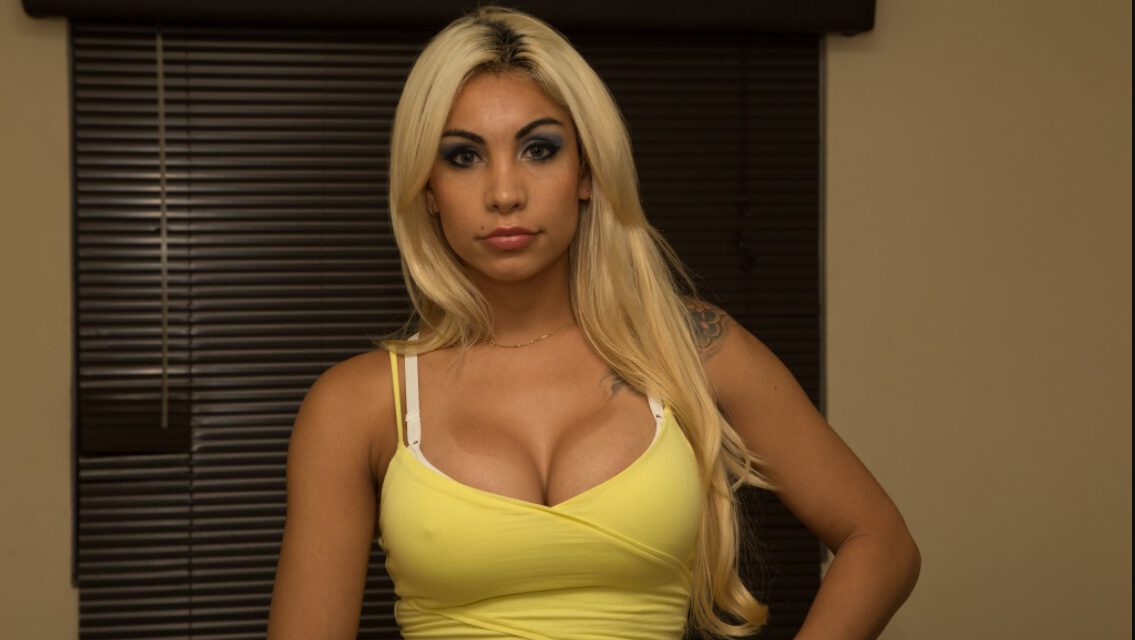 The beautiful blonde TS woman in the photo is Angeles Cid. No wonder Hans is so thrilled. 😁

The new yoga studio in my street had opened a few weeks ago in Berlin. I had stood curiously at the window a few times. That Saturday morning, I walked in. I was welcomed by Hans, a slim German man of around fifty years with a long gray ponytail. He asked me if I had practiced yoga before, to which I confessed that it was my first time. He invited me to come and take a trial lesson in the afternoon. I had to wear comfortable clothes and bring a towel.

A few hours later I was standing on the mat in sweatpants and a T-shirt among five other beginners, all women, and Hans in front of us. I was the only transgender person, born as a boy but now looking like a beautiful young woman, I would say. We started with breathing exercises, stretching our bodies, then we had to do certain postures. The mountain pose, the warrior pose, and the dancer pose. Hans instructed us and walked around to correct us. He put his hand on the women and bent, pushed or stretched them until their posture was right. “You are new,” he said to me, “and not everyone is keen on being touched, so I always ask: can I touch you?” I said that was fine. He grabbed me under my armpit and pushed my arm up a bit. Then he pulled my hips back and pushed my back forward. “So,” he said, “a beautiful warrior, hold this.” He moved on to the next one, and I glowed with pride. The downward dog followed. We had to put our hands on the floor so that we were all bent over. Hans kneaded us until the position was right.

He came to me, stood behind me, spread his legs, and with two hands pushed my back further forward. He stood pressed against my buttocks and I felt his warmth. A shiver ran through my body and I felt movement in my cock. His hands pushed gently along my spine to my neck and Hans was almost on top of me. “Good for you!” he said, “You’re good at it, you’ve got a flexible body!” And what a beautiful body you have got. This is the first time someone like you has been here. We had to return to the mountain pose. I adjusted the posture slightly: instead of holding my arms next to my body, I held them in front of my body. In vain, because Hans must have seen the erection in my shorts. He smiled at me and asked us to sit down. Thank God. I could relax. The next positions were sitting. We went from the easy pose to the lotus and Hans walked around. I could see the outline of his genitals in his tight trousers. My genitals had just started to lie down but immediately came up again. I closed my eyes and heard Hans coming my way. He stood right in front of me and took my head, pulling on it a little. I groaned. Hans laughed and stroked my head before asking us to sit in a circle.

He asked us how we had experienced the lesson. The first to respond was very enthusiastic and took out a monthly subscription, the rest couldn’t stay behind and decided to buy one too. I paid for ten lessons and Hans asked me if I already knew when I would come; he gave the lessons himself in the morning and in the afternoon.

On Monday morning, I came in and followed the class with a group in which the male participants had doubled compared to the previous time. Hans’s hands were touching us, again and again, my genitals were getting hard after the pushing and pulling on my body and I felt him against me. When he walked away I thought I could also see a bigger bulge in his trousers. We did a number of lying positions. My dick was busy that lesson; it regularly stood up, but fortunately, it always relaxed again quickly. At the end of the lesson, I noticed a wet spot where my dick had been pressing against my trousers and hoped nobody would see it. After the lesson, Hans asked me if I would join in again the next day. When I said I had to work all day, he suggested I come for work. According to him, the beginning of the day was the perfect time for yoga.

At half-past six, I stood on the mat. I was the only one who had braved the dark freezing cold, but then I lived only a few minutes away. It was nice and warm in the studio, and Hans walked around bare-chested. The red-orange lamps illuminated the room. We started in a standing position. Hans stood behind me and put one hand on my chest and one on my stomach. I had to watch my breathing carefully. Hans talked to me and lightly rubbed my belly and chest. It excited me. I had to lie down and he got down on his knees behind my head. He pushed my shoulders against the mat and made me move my legs in particular. He bent over me and helped me. I felt his breath on my belly, and his genitals were just a few centimeters from my face. I felt the blood flowing to my genitals. He pushed my legs down and his crotch briefly touched my face.

With a few jolts, my genitals were rock hard and pointed straight up to Hans’ face. He slid his hands from my knees to my hips and shook me. I felt him looking at my erection, but he said nothing. He stretched out his arms and grabbed my ankles. I could now clearly see his stiff cock in Hans’ trousers, too. He stood up and paid no attention to the pole in his trousers. I had to turn around and do the downward dog. He first pulled my arms forward a bit and then stood behind me.

He spread my legs more and pushed his fingers along my spine and I felt his genitals rubbing against my buttocks. The position changed to frog, which meant I was on my hands and knees and had to push my ass up. Hans sat behind me and put his hands under my buttocks. He pressed his hard genitals firmly against my buttocks while pushing into my back. He asked if I liked this position, and I said it was lovely. I rocked my hips and felt his stiff cock throbbing. We stood there for a while until Hans said the lesson was over. My dick was about to explode, and it looked like Hans’ was too. Hans asked when I was coming again.

Summary The new yoga studio in my street had opened a few weeks ago in Berlin. I had stood curiously at the window a few times. That Saturday morning, I walked in. I was welcomed by Hans, a slim German man of around fifty years with a long gray ponytail. He asked me if I had practiced yoga before, to which I confessed that it was my first time. He invited me to come and take a trial lesson in the afternoon. I had to wear comfortable clothes and bring a towel.

My niece changed so Much!

The masseur was a Ladyboy