After we had visited a couple of couples clubs and after Crystal had been gang banged twice in a sex cinema, I thought she had pretty much explored her limits. Women were no secret to her by now either. She had already had a number of dates with ladies. But late one night, she had just had one more glass of wine than usual, she came and sat next to me on the sofa.

‘You know, I’ve been thinking …’ She paused, as if waiting for a little encouragement from me. ‘All these things, that I’m doing … it’s already going pretty far, I think, right?’ I wondered what she was getting at, but at least she had gotten my attention. I would really like to know how far I dare to go, what I still like and what goes too far for me. That’s what I’m thinking about.’ Okay, she had something in mind, but in her usual way she waited for my initiative.

What are you thinking about, dear? You must have something already in that beautiful Asian head of yours, something is brewing.’ I had no idea what she was going to tell me, but I think it was something I was going to find at least interesting, or maybe even exciting. Well, I thought, before the thread with it.

I notice that I get horny, especially from thoughts of which I wonder: ‘would I still dare to do that, or would that be going too far? Things that I wouldn’t want, but when I’m in the mood for them … Things that are really on the edge. The latter was true. She had surprised me a few times already, for example at the couple’s club or in the sex cinema, by doing things we hadn’t agreed on beforehand. What surprised me most, and also excited me, was that afterwards she seemed to have absolutely no regrets. Appeared to have, I can say in all honesty.

‘You want to be even more of a slut than you already have been for the past few months?’ She smiled at me for a moment. That know-it-all smile, that we-will-see-it look. It means in most cases that she already knows and she also knows what she wants. Okay, so she wanted to be even more of a slut than she already was. I was interested. Very interested. ‘Would you like to play the whore, for example?’ It was out before I knew it, but her reaction wasn’t very shocked, ‘Not that right away, but I was thinking of something else. You know that I like to be looked at?

That I’m an exhibitionist? That it turns me on when men look at my full body while I play with myself?’ It was true. She no longer worried about being too fat, she had come to love her own body in a healthy way and had discovered that there are men who love full Rubens women. Not least me. ‘Well, I was thinking, couldn’t I go behind the sex cam sometime? Just, make some extra money? Let men look at me while I’m having a good time with myself?’ I had to let it sink in for a moment, but my first reaction was one of excitement. ‘But you know that you’re just a sex worker, then?

That you make money from sex then?

It was late, but we decided to take action right away. She wanted to check out other transcam girls, to see how it works. She didn’t really know anything. I knew a little. After our exploratory round we decided to have some sex chat on flirted: in no time, more than 100 men were watching Crystal play with her breasts alone, and later with more. She visibly enjoyed the attention, and the men on the other side of the cam probably did as well.

I expected her not to come back to it, that she would have come to her senses by the next morning, but nothing was further from the truth: she ordered a good webcam and registered with a cam website. She asked me to take suitable pictures for her profile. Nothing seemed to make her hesitate. I said: you know you are a prostitute from now on? My little whore? She just seemed to enjoy the thought.

The next Wednesday, she had been behind the cam for a bit longer. I asked her in the evening if she had thought about what she would and wouldn’t do behind the cam. ‘Not really, but maybe I should let that depend on it a little, or something. I do it because I like it. Today I had a nice conversation with a very nice man, and then I took off my bra and played with my nipples. I noticed that I also just liked playing with myself a bit in front of him.

I was home earlier than usual, and I had seen that she was online. I decided to walk quietly upstairs to the study, where she was busy. What I saw then made the blood go to my head. She was clearly talking. She didn’t answer anymore but was naked and with her whole body in view. Likewise, she didn’t even notice that I had come in, which wasn’t surprising. I could see that she was already far gone.

She moaned without holding back for even a moment

Regular customer by now, comes by every week. This time he stayed very long, I think he stayed for about an hour. Nice guy, not so pushy, just civilized. I just had a nice chat with him!’ ‘And then you don’t mind moving on either?’ ‘No, right. You’re kind of a dick too huh. Never before have I gone completely out of my clothes in front of the cam, never with my whole body on the screen, never played with my ass in front of the cam, do I do that one time, sir comes home an hour early!’ She laughed generously. ‘What a jerk you are too!’

‘Do you still know what your limits are?’ I asked her in the evening on the sofa. ‘Yup, I think so. It feels okay what I’m doing. Then it’s okay, right? Or do you have a problem with it?’ ‘No, I didn’t. ‘Do you have a problem with me having regular customers? I think I have about a couple now who have come to me a few times. And George, from this morning, I just have long conversations with that. About everything actually. Good conversations too. Well, then I finger myself for him and he pulls his cock.

That he fucks you, for instance, or would you like to have his cock in your mouth? I had a fantasy this morning that he had my hands tied behind my back, and that I was sucking him until he climaxed. The crazy thing is, we came at the same time, George and I, and also in my fantasy he came at that time. Was pretty good actually.’ I noticed that I already had a new fantasy that I would like to try out with Crystal.

‘There is one boundary I don’t cross, though. Men often ask for a pay date. So I don’t do that.’ ‘But do you say that too? That you don’t?” ‘Yes, why?’ I let out a pause. ‘Isn’t it more convenient to say “maybe so”? Get to know men, you’ve got to lead them on a bit. You have to get them a little tasty. You want to keep them on the line as long as possible, don’t you? Then you have to offer them something, too.’ She hadn’t looked at it that way, she said. ‘Actually, I think that’s a hot idea myself, that “maybe” of yours. I’m not going to do it, mind you, but I do think it’s kind of horny.’ That “maybe” was a door I had left ajar myself, and I was curious what would follow.

She had sat down next to me on the couch

“I did tell you about Maikel and George, didn’t I? She had sat down next to me on the couch again one Wednesday night. She told me about two of her regulars on cam, ‘Both men in their late forties. Modest, nice, quite good-looking, certainly not the stuffy guys you’d expect. Married too, both… Decent guys.’ ‘What do you want to tell me Crystal’ ‘Well, both of them asked for a pay date today. Both of them, after I’ve been talking to them for weeks. Don’t you think that’s crazy? Well, anyway. Sure, I said “maybe,” but I’ve been restless in my head ever since.

Since then she has not had many dates. Maikel and George are regulars and now Gerco has joined them. More will probably follow. The agreement is: long term cam contact and it has to feel good. Playing whore is going well for her, she enjoys the attention and the sex. She knows she can’t go back: she has become a prostitute and she enjoys it.

The money, that’s part of the ritual, that’s a fetish, not really important. She also wants to be paid in cash, just to take the banknotes in her hand. She tells in detail all the things she has experienced, and the crazy thing is: the sex between us only gets better from all these stories.

And me? I’m just curious about what’s to come. I did ask her to raise the price, but she refuses. She wants to feel, I guess, like a cheap, perverted fuck slut, and that’s allowed. Of course it’s allowed. 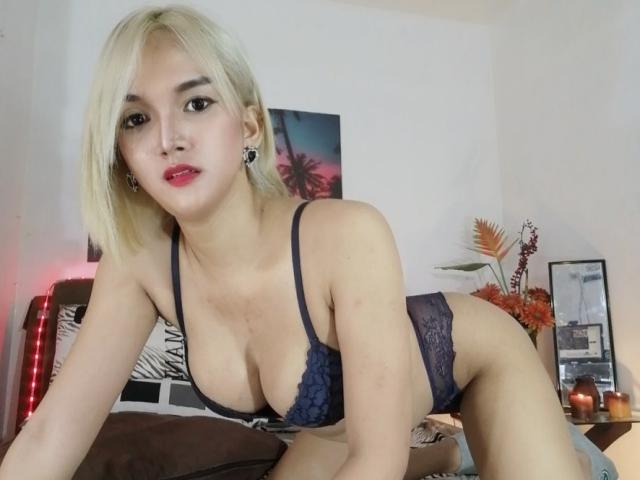 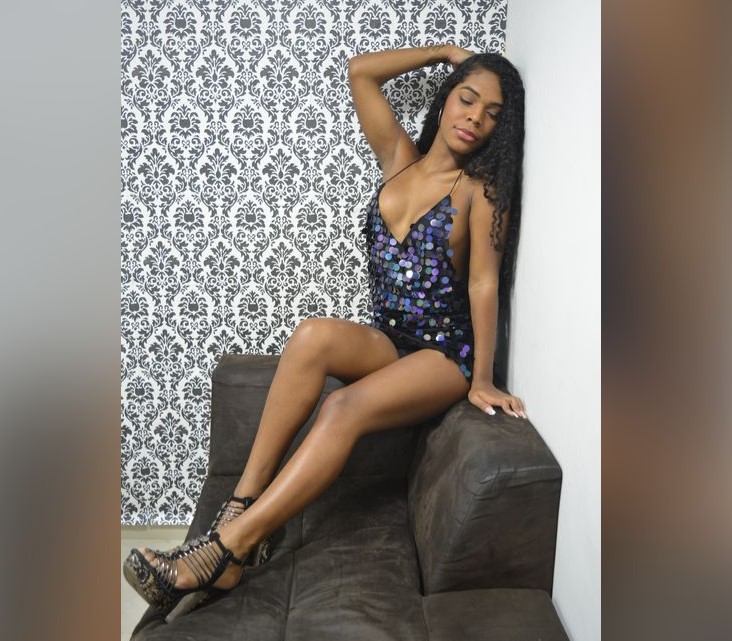 Latina TS princess sings along with her favorite music 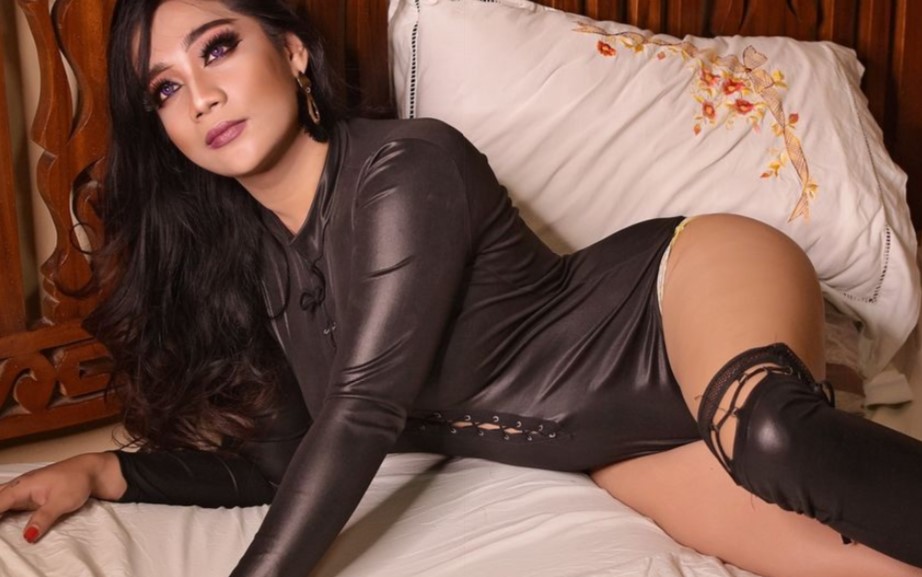 Look what I found on cam!